Legality of Rapid-Fire Devices – Not Machine Guns nor Fully Automatic 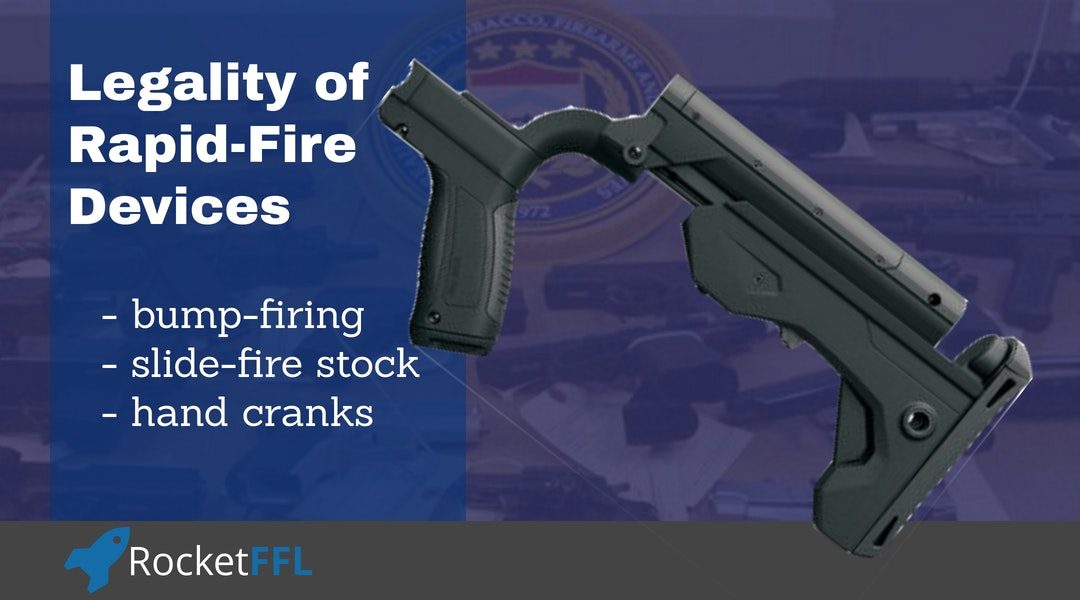 With the recent horrible shooting event in Las Vegas, Nevada, where 59 people were murdered and hundreds more were injured, the question about whether the shooter actually used a full-automatic machine gun has been popular.

I may have inadvertently started this debate. When I first learned of the attack this morning, I saw a video of the gunfire. I immediately noticed the sporadic nature of the shots – they were rapid, similar to full-auto fire, but the rhythm seemed off.

Within minutes, and while still enjoying my morning coffee, I was speaking with Fox News to help them with their story. This is when I first mentioned my hunch that it may not have actually been a machine-gun but instead a device to mimic full-auto fire. Since then< i have watched different news sources pick up the possibility and run with it all day.

Just before dinner tonight, I received a call from a different news agency asking me to confirm a device vs. machine gun. I laughed and explained that I was just offering my opinion and that I had no facts concerning the firearm(s) used. The reporter had no idea what I was talking about – they had not seen my quotes in the other news stories (or at least had not made the connection).

Apparently, their source had confirmed that there were no full-auto machine guns in the shooter’s hotel room and instead two of the firearms appeared to have devices to allow rapid fire from a semi-automatic rifle. At this point it remains to be seen. Normally I like being right (just ask my wife) but this time having a hunch pay off was hollow.

What is a Machine Gun?

In the simplest possible terms, a machine gun is a firearm that shoots more than one bullet for every pull of the trigger. For a bigger conversation on the restrictions on machine-guns and some more nuances of the definitions, check out Who Can Own a Full-Auto machine Gun.

Yes, they’re legal for law abiding Americans to own as long as the machine gun was made before 1986 and it isn’t banned by relevant state or local law. The process to lawfully possess one is painful – a $200 tax stamp (on top of the already inflated price because of the limited supply/rarity), fingerprints and photos, a thorough federal government background check, and a wait up to a year long for approval. Of course, law enforcement officers are exempt from the date, registration, and location restrictions in accordance with their official duties.

A machine-gun will typically shoot with a steady cadence of fire – any hiccups in the firing are largely due to a malfunction and the shooting would then stop until the malfunction was fixed. However, if someone were to make a semi-automatic firearm fire as quick as physically possible by either “bump-firing” it or by using an external device, then that type of sporadic fire can be expected.

Bump-Firing is Not Fully-Automatic Fire

It is an impractical way to shoot a firearm, however.

Bump-firing can take a few different forms but the premise is the same: the shooter’s trigger finger is held in a fixed/stationary position while the shooter’s support hand pulls forward on the firearm. The firearm’s trigger is pulled into the shooter’s finger (as opposed to the normal process which is the other way around), the gun then fires, and recoil moves the gun rearward.

Bump-firing only works with the perfect amount of forward pressure on the firearm.  The pressure must be enough to pull the firearm forward and engaged the trigger, but not so much that the recoil of the firearm isn’t strong enough to move the firearm temporarily rearward removing the trigger from the finger.

In a sense, the rifle is repeatedly recoiling away from the stationary trigger finger while the support hand is returning it forward to have the trigger pulled.

Although bump-firing results in rapid firing (sometimes faster than the firearm can handle), it does NOT make the firearm a machine gun. This is because the firearm’s trigger is being pulled once for every bullet that is fired.

UPDATE: As of March 26, 2019, bump-fire stocks have been made illegal by executive order and ATF rule making.

There are devices that make bump firing easier.

For example, the SlideFire stock. This product works for AR and AK style rifles and replaces and/or covers the buttstock portion of the rifle. It allows the rifle to slide forward and back while the stock stays in the shooter’s shoulder and the shooter’s trigger finger can rest in a fixed position on the stock.

At the time of this article’s writing, it exploited a technicality in the law. Since then, the ATF has reclassified bump-fire stocks as machine-guns thereby banning them.

The final rule clarifies that the definition of “machinegun” in the Gun Control Act (GCA) and National Firearms Act (NFA) includes bump-stock-type devices, i.e., devices that allow a semiautomatic firearm to shoot more than one shot with a single pull of the trigger by harnessing the recoil energy of the semiautomatic firearm to which it is affixed so that the trigger resets and continues firing without additional physical manipulation of the trigger by the shooter.

Machine guns are an emotional issue – they don’t increase the overall lethality of the shooter. Yes, they can allow a lot of bullets to be shot quickly but not accurately. And, they make the shooter stop to reload more.

In fact, if I ever shot my rifle in full-auto mode while I was in the military, I probably would’ve been fired – that’s how ineffective it is from a shoulder-fired rifle.

In fact, from what I’ve read so far, the shooting took 72 minutes. The shooter could’ve have killed many more people if he took 1 aimed shot per minute instead of shooting so rapidly. 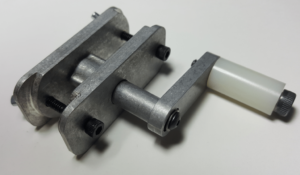 Another type of device to allow rapid fire of a rifle is a hand crank. These devices typically clamp onto the trigger guard of the rifle and a small actuator moves the trigger as the crank is turned.

UPDATE: As of March 26, 2019, devices that increase a firearm’s rate of fire have been made illegal by executive order and ATF rule making.

Yes, these can allow very rapid firing but at the time of the original writing of this article, they were not machine guns either – there’s still one trigger “pull” for every bullet being fired. However, they’ve since been banned.

There was recently a obnoxious device called the auto-glove. Upon seeing it, I wondered how it was legal and why anyone would want it.

It was an electronic motor attached to a glove to automatically actuate the trigger. Within a few days on the market, the ATF formally explained that the device constituted a machine gun and was thereby banned.

If you want further support for how full-auto fire is generally ineffective, look at auto-glove’s video and note the girl sending a bullet at a 45 degree up in the air because the full-auto fire can not be aimed.

Should These Devices Be Legal?

Here is the original text from this article:

That’s not up to me. However, if you choose to sell them in your store, PLEASE be careful.

As I often tell my clients, you can do something legally right but end up in a bad position later. Each FFL is the last defense against criminal misuse of firearms – stay vigilant and if you decide to sell these products, please abort any transaction that doesn’t “feel” right.

Updated text: Well, it looks like my advice was accurate – be careful, folks!

I look forward to having you in our industry and I’d love to see you in one of our courses,