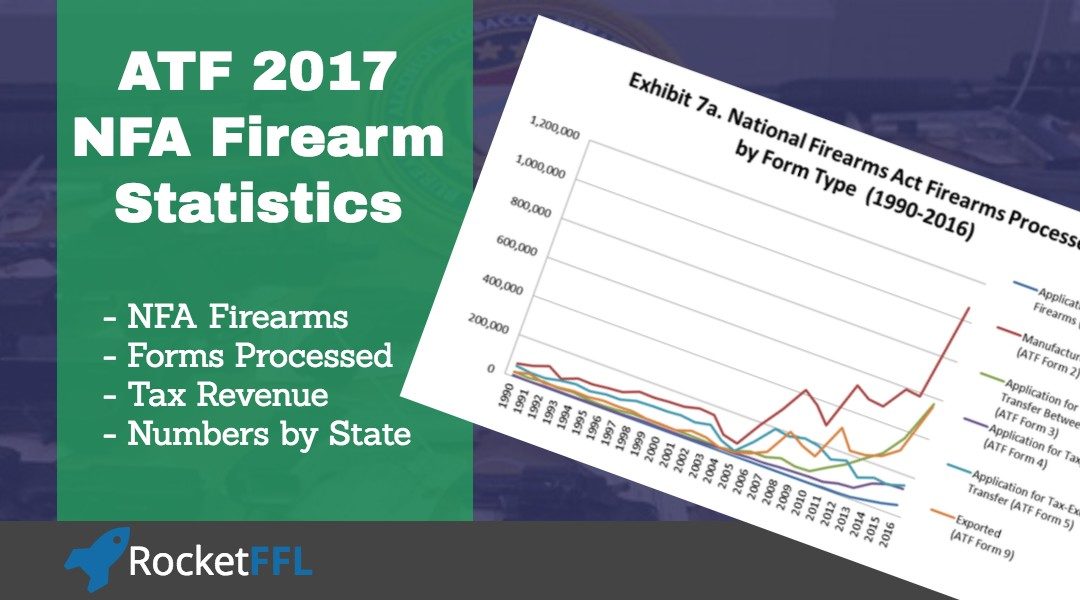 Welcome to the mother-lode of ATF-related data on NFA firearms!

In the ATF’s Firearms Commerce in the United States Annual Statistics Update 2017, they share information on:

In this article, we’ll stick to the National Firearms Act (NFA) information to keep the information manageable.  If you’re interested in the rest of the ATF data, check out our articles on Firearms in Commerce and FFL Applications and Inspections Statistics.

The market is so big for NFA firearms that many people recognize the business opportunity and want to get started making and/or selling NFA items.  However, the process can be very intimidating for some.  There’s a lot to know to get your FFL and become an SOT and there’s even more to know to stay out of trouble.

Because of this, we created RocketFFL to help you – check out our courses on Getting Your FFL and Becoming an SOT.

As you can see in the graph below, there’s a LOT more NFA firearm being manufactured than there are being sold/transferred (almost double).  That’s what has led to some flooding of the market of NFA items.

The good news if you’re just starting out?  Everything is on sale! 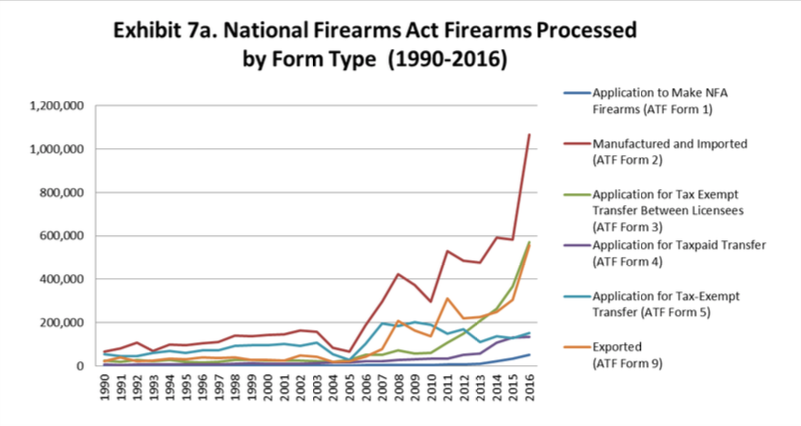 In 2016, the ATF processed 2,530,209 NFA forms.  That’s not how many NFA firearms were sold – every firearm that was sold on a Form 4 to an individual was transferred from FFL to FFL on a Form 3 and manufactured by an FFL on a Form 2.

That’s not much more NFA sales than the previous year even though manufacturing almost doubled.

You can see the numbers of each NFA Form back to 1990 in the ATF’s Report, but I’ve shared the last five years data from the ATF below.

If you haven’t taken training from us, you may not know what each Form is for and when it is used. Here’s a simple breakdown for you:

Also, an FFL can become a Special Occupational Taxpayer (SOT) to pay a tax once a year and avoid paying the tax per NFA firearm made or transferred.  For some FFLs, this is a requirement. You can learn more about this in our Get Your FFL course. 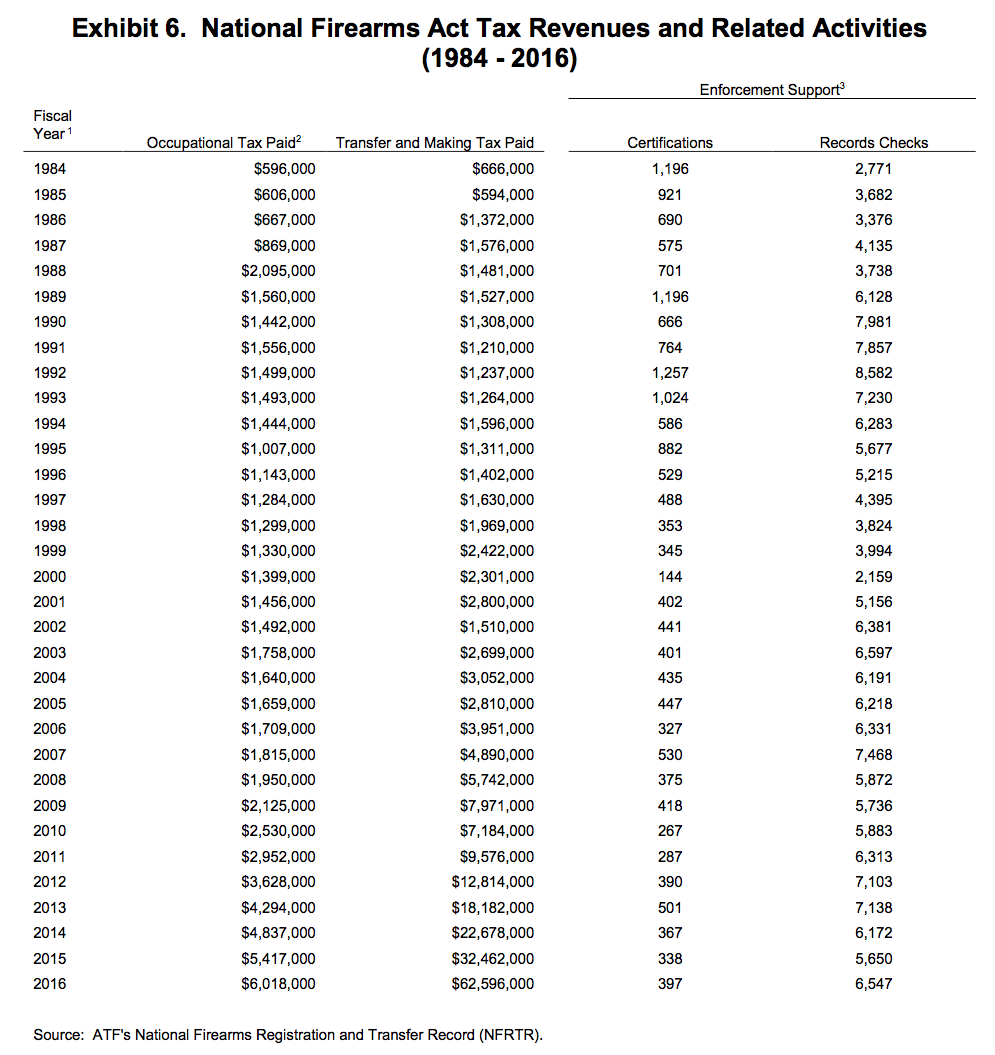 Unfortunately, the ATF doesn’t get to keep that money to help pay for more people to process the forms and for a better infrastructure.  Instead, the money goes into the general treasury.

When I managed federal government relations for the firearms industry’s trade association, the National Shooting Sports Foundation, we lobbied to have the money stay with ATF so that they could reduce the wait-times customers must wait after the purchase their NFA firearm and before they can lawfully possess it.  Currently, those wait-times are up to 1 year!

This is another reason to get your FFL, you can get a silencer (or other NFA firearm) at discounted pricing within a month!  Or, you can keep paying full-retail and waiting up to a year.

The ATF keeps an updated registry of the location of every NFA firearm on their National Firearms Registry and Transfer Record (NFR&TR).

Here’s a breakdown, by state, of the location and number of each type of NFA firearm (including Any Other Weapons, Destructive Devices, Machineguns, Silencers, Short-Barreled Rifles, and Short-Barreled Shotguns) in the United States: 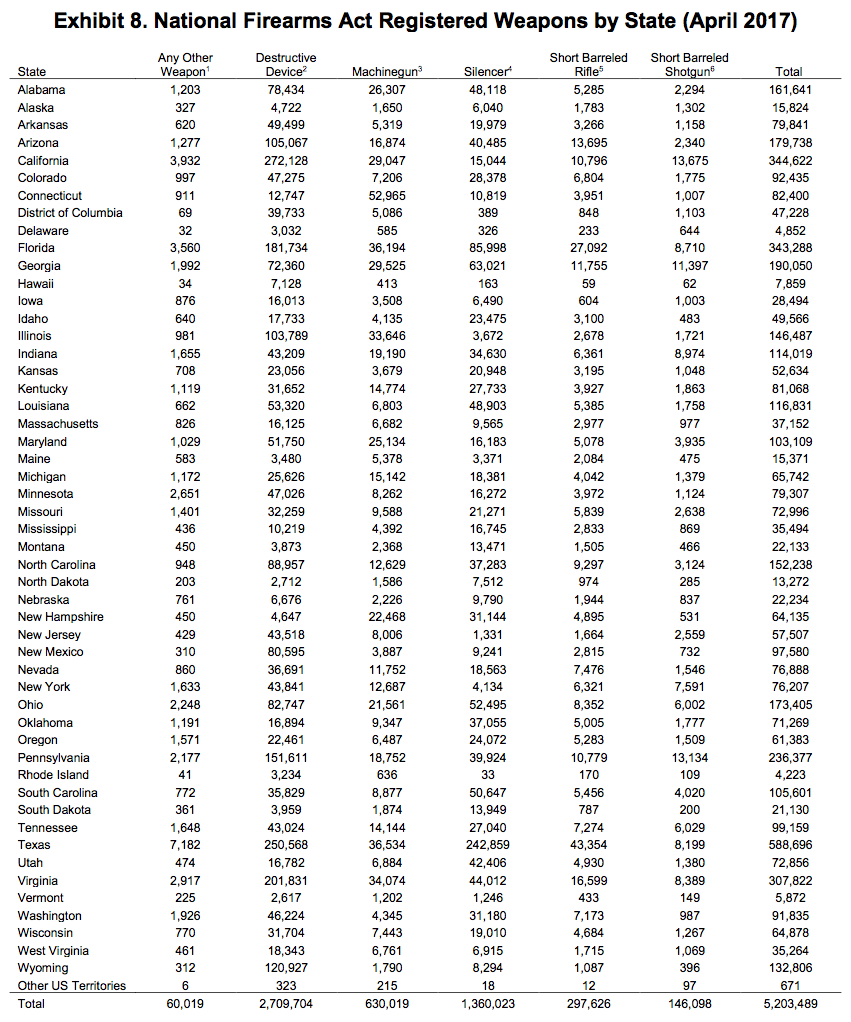 This information helps us to know exactly (well, as precisely as the ATF can keep their records) how many registered NFA firearms are in our country….5,203,489!