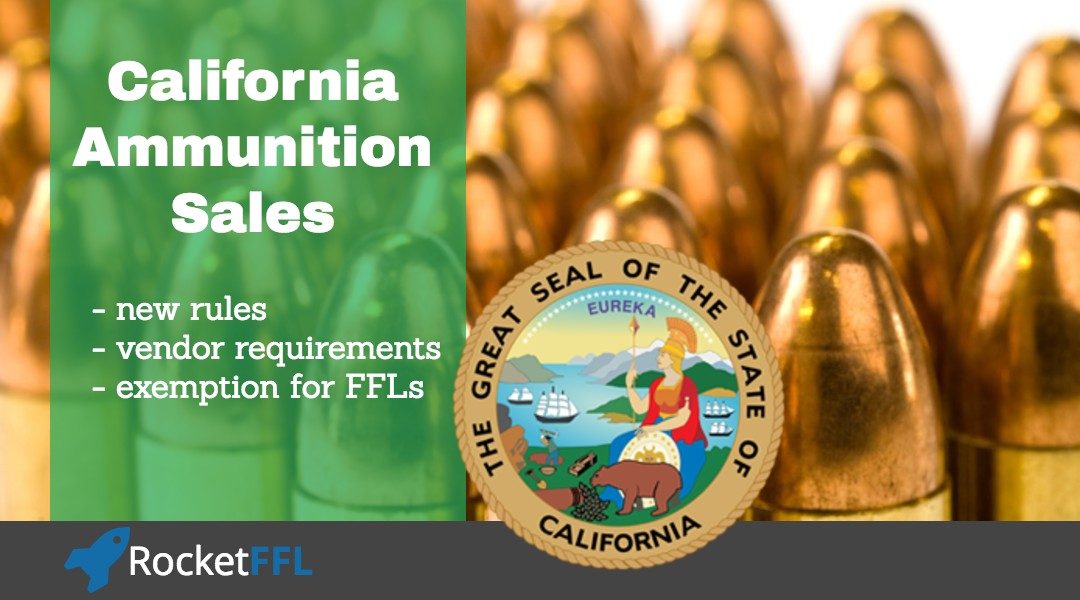 Q: What are the new California ammunition laws?

A: Beginning January 1, 2018, all ammunition sales must occur in face-to-face transactions (no online ammunition sales in California) and the seller needs a valid Ammunition Vendor License in order to sell more than 500 rounds of ammunition in any 30-day period. 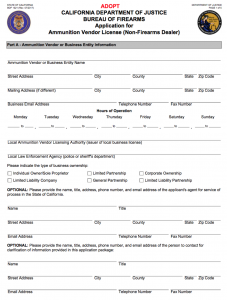 California has recently enacted new laws regarding ammunition sales due to the passing of their Proposition 63. As you can see in the Q&A above, there are two major changes to the way ammunition is treated in California:

This is obviously bad for gun rights and our industry.

To make matters even worse, California is already having problems figuring out how to accept and process applications and issue California ammunition vendor permits.

However, if you’re already a Gun Dealer in California (or you’ve been thinking about becoming one by becoming an FFL) there’s a little bit good news:

Due to Prop 63, if you’d like to sell over 500 rounds of ammunition a month in California, you’ve got two options:

Ok, we’re a bit biased but we think that the best option is to get an FFL!

As mentioned above, gun dealers in California are automatically deemed California Ammunition Vendors. This means you can sell ammunition in California AND you can purchase guns at a discount, have them delivered right to you, and make money selling guns.

As is all too common for the absolutely broken (inept) California government/bureaucracy, the state hasn’t even figured out/made it clear how to process ammunition transactions!  We’ll update this page with more info as we have it.

1/1/18 – It is unclear what paperwork (if any) a licensed ammunition vendor or FFL must complete for sales, what the fee (if any) might be, how (if) to charge tax on 3rd party transfers, etc. All we know it this point is that an ammunition vendors license is needed in California (unless you’re an FFL). Also, for those that have applied for licenses, they haven;t been issued yet.

From the California Bureau of Firearms:

Beginning January 1, 2018, a valid ammunition vendor license is required for any person, firm, corporation, or other business enterprise to sell more than 500 rounds of ammunition in any 30-day period. (See California Penal Code section 30342.) The Department of Justice is authorized to issue the license, which is valid for a period of one year. Providing the requirements are met, a licensed firearm dealer is automatically deemed a licensed ammunition vendor. All other vendors must apply for, and receive, the annual license before selling ammunition. If an application is denied, the Department will inform the applicant of the reason for the denial in writing. (See California Penal Code section 30385.)

In accordance with these provisions, the Department has received and processed more than 225 applications for ammunition vendor licenses since July 2017. The Department expects to issue a license electronically, upon approval of its regulations.