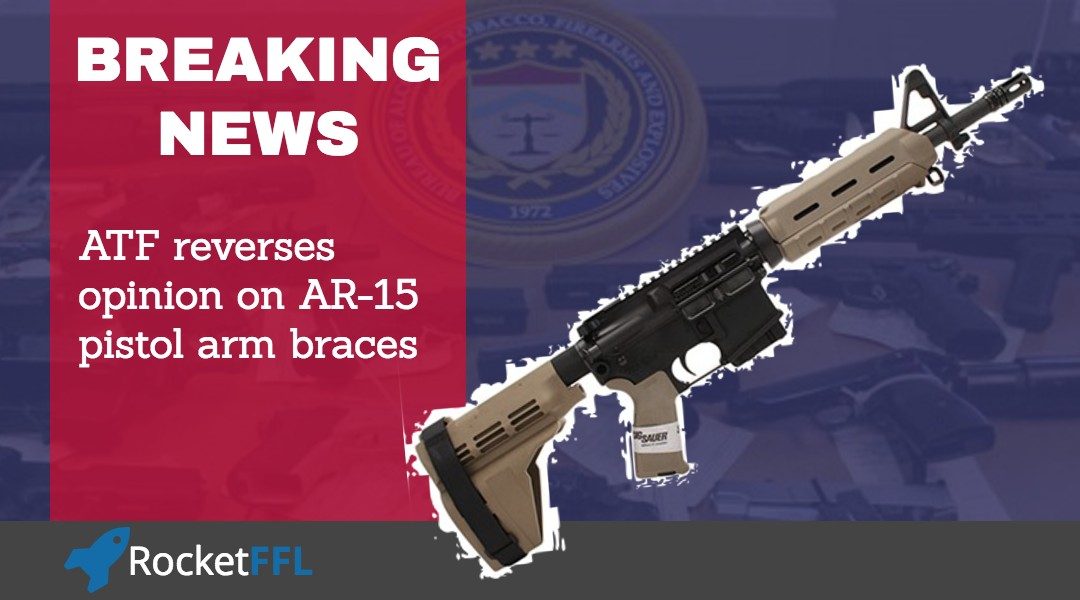 The ATF just reversed their position concerning the “shouldering” of a pistol brace – it no longer magically converts a pistol into a rifle.

This is huge news for our industry.  AR-15 pistols can now be fired from the shoulder without the shooter being in fear of being put in jail (or harassed by a poindexter at the range).

To understand what happened, and its significance, we must cover a few basics first.

A rifle is a firearm that “is designed and intended to be fired from the shoulder and has a rifled barrel.”  Any rifle that has a barrel length of less than 16 inches or an overall length of less than 26 inches is a “Short Barreled Rifle” (SBR) and is subject to extra regulations and control under the National Firearms Act of 1934 (NFA).

The NFA was intended to help control especially “dangerous weapons” that were being used by gangs at the time.  These SBRs were a concern because they were easy to conceal.  Yes, handguns are even easier to conceal, however, the ability to shoot a firearm from the shoulder gives much more control to the shooter than just firing it by hand.

In 2013, longer ago than the average attention span of today’s internet user, a product was invented: the Pistol Stabilizing Brace.  This device was installed on a buffer tube of an AR-15 in lieu of a shoulder stock and was “designed” to be used as a cuff around the shooter’s forearm.  It looked like a very short shoulder stock – it even had some very similar design characteristics such as the same side-profile and some horizontal groves.

The new Pistol Stabilizing Brace was quickly picked up by Sig and took the industry by storm.  This device allowed people to create AR-15s with short barrels without having to deal with the restrictions, cost, and hassle of dealing with an actual SBR.  Because the device was not “designed and intended to be fired from the shoulder,” the firearm did not meet the basic definition of a rifle. Therefore, if it was’t a rifle in the first place, it could’t be a Short Barreled Rifle (SBR).

In my opinion, AR-15 pistols in .223 Rem are kinda’ pointless but they sure were popular.  Although not exactly the most comfortable way to use them, they could easily be shouldered and would allow someone to shoot an AR-15 pistol like it was a rifle.  Remember, the law didn’t say “used from the shoulder,” it says “designed and intended.”  Therefore, as long as the inventor claimed that he designed and intended it to be used from the forearm (he did), everyone was good to go.

These things popped up EVERYWHERE until early 2015.

Shouldering a Pistol Re-designed it into a Rifle 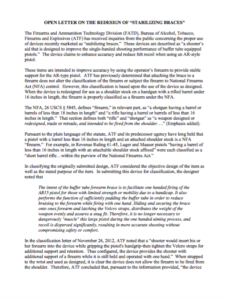 In early 2015 the ATF released an “Open Letter” explaining that a shooter who shoulders a pistol brace has “redesigned” the pistol brace into shoulder stock.  HUGE NEWS.  This means that the Pistol Stabilizing Braces could still be used to manufacture an AR-15 pistol but if you were caught firing it from your shoulder, you just committed a serious crime.  That is of course unless you were an FFL manufacturer – you can make an SBR whenever you want. 🙂

During an industry meeting with the ATF at SHOT Show 2015, I argued with the ATF over this absurd determination.  Outside the meeting room I was told by two very senior members of the ATF that this was a determination based on a request they received from someone who had rolled a towel and inserted it into the arm cuff of the brace and then wrapped the thing in duct tape thereby making a shoulder stock.  This person apparently sent in pictures and asked the ATF if it was a brace.  To this day I don’t know if it was a foolish gun owner or an anti-gunner looking to make a stink.

I told them that I agreed with their determination of the sample that was submitted.  That person clearly used parts (a Pistol stabilizing Brace, a towel, and duct tape) to make a shoulder stock.  However, their letter didn’t mention any of that and it went so far to say as “use as a shoulder stock constitutes a ‘redesign’ of the device.”

They insisted to me, in person, that merely shooting a pistol from the shoulder didn’t make a rifle.  They agreed with my arguments that the law focused on “designed and intended” and that subsequent use didn’t redesign something.  They clarified that only if someone went through the effort to make something new or truly redesign the pistol brace was it an issue.  I told them that they should have written that in their letter because as it stands, use = redesign.

I appreciate these relationships I have in the ATF – I have respect for both of these guys and, believe it or not, I understand the position they were in.  I also think the letter was either worded poorly or the ATF wanted the result.  AR-15 pistols have long been a thorn in the side of ATF.  After all, they are what started the whole problem with ammunition that was normally considered to be rifle ammunition being treated as handgun ammunition for purposes of banning armor-piercing handgun ammo (this is a story for another day).

I even asked them if I used my pistol to keep my papers from blowing off my desk, is it no longer a pistol?  Clearly I’ve redesigned it through use into a paperweight. 🙂

To be fair, “redesign” is in the law.  The NFA defines both rifle and shotgun to include any “weapon designed or redesigned, made or remade, and intended to be fired from the shoulder.”  Presumably this was to cover people sawing off a shotgun barrel at home.  They would have then redesigned a shotgun into a Short Barreled Shotgun (SBS).

The industry was then stuck with this guidance from ATF:

“The pistol stabilizing brace was neither “designed” nor approved to be used as a shoulder stock, and therefore use as a shoulder stock constitutes a “redesign” of the device because a possessor has changed the very function of the item. Any individual letters stating otherwise are contrary to the plain language of the NFA, misapply Federal law, and are hereby revoked.

Any person who intends to use a handgun stabilizing brace as a shoulder stock on a pistol (having a rifled barrel under 16 inches in length or a smooth bore firearm with a barrel under 18 inches in length) must first file an ATF Form 1 and pay the applicable tax because the resulting firearm will be subject to all provisions of the NFA.” 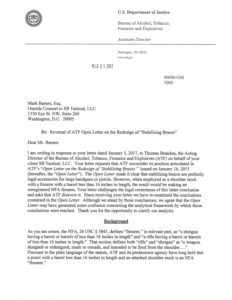 In a March 21, 2017 letter from the ATF to the inventor of the Pistol Stabilizing Brace, the ATF reversed its opinion.  The ATF says they just clarified a misunderstanding, but the industry was stuck with what they put in black and white on paper, not what they may have meant.

The ATF finally acknowledged that their concern was about people who took actual steps to re-design something into something new. For example, the letter explains that if the Pistol Stabilizing Brace was mounted long enough down a buffer tube to prevent its use as an arm brace and instead was at a length that was only useful as a shoulder stock, then they have redesigned it into a shoulder stock.

The ATF also clearly acknowledged that merely shouldering a Pistol Stabilizing Brace while firing it does NOT turn an AR-15 pistol into an SBR.  They wrote, “…an NFA firearm has not necessarily been made when the device has not been reconfigured for use as a shoulder stock – even if the attached firearm happens to be fired from the shoulder.”

This is all good news – although some of it is questionable.  For example, what is this new mystery length that can only be suitable for use as a shoulder stock?  Exactly where is the line drawn when determining what is a redesign?

What constitutes a redesign of a pistol brace?

Simply, “taking affirmative steps to configure [a pistol stabilizing brace] for use as a shoulder stock.”  The ATF adds that “making” an NFA firearm “includes the altering of an existing firearm such that, after alteration, the firearm meets one of the enumerated descriptions [of an NFA firearm].”

Therefore, if you install a Pistol Stabilizing Brace on an AR-15 pistol as it was intended to be installed (on the buffer tube and up against, or at least close to, the rear of the receiver), then you have not “redesigned” anything.   If you then fire that pistol from your shoulder, you haven’t changed the original designer’s intent and you haven’t redesigned it.

Be careful.  While this applies to all pistol braces, you must ensure that what you have is actually a pistol brace and the firearm you are dealing with is a pistol in the first place!  Just because a manufacturer calls their product a pistol brace doesn’t necessarily mean that the ATF agrees.  Also, you may not have a non-NFA pistol – for just one example, if the pistol has a smooth barrel and is designed and intended to shoot shotgun shells, it might be an Any Other Weapon (AOW).

This is good news.  Pistol Stabilizing Braces may be fired from the shoulder as long as other affirmative steps have not been taken to alter, modify, nor configure the pistol stabilizing brace as a shoulder stock.